I'm putting this here in my Devon Diary as I think it is an appropriate place. 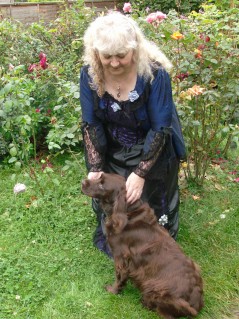 Rum was a chestmnut coated Field Spaniel we got him from Wood Green Animal Shelter, Cambridgeshire. He had been badly treated, which is why he was at the rescue centre. A young couple had rescued him from a home where he had been beaten and kicked on a regular basis, but they found because they were at work all day that they could not give him a good home so did the sensible thing and handed him in to the Centre. Where we found him.
He was very fat - and I admit when I first saw him I thought he was the ugliest dog I had ever seen! He soon lost weight - but poor boy, his pads were so smooth because he had never had proper walks, that he was very footsore.

The first thing he did when we got him home was mess on the carpet - but that was nerves and excitement, he was never unclean in the house again (until these last few days where old age got the better of him).

He was called Rocky then - a most unsuitable name. We wanted to keep the 'R' sound though, and 'Rum' seemed a good choice because of his colour. (Ironic that a few years later I started writing the first of my Sea Witch Voyages!)

He came with us to the show jumping centres where Kathy was competing - the first time Ron took him over the fields Rum came to a ditch and had no idea what to do with it. Imagine, a dog who didn't know how to jump over a ditch!
He soon learnt that ditches with stagnant water in  them were good fun though!

He chased off after a herd of Fallow Deer once and Ron lost him. Kathy and I were back at the Equestrian Centre - Kathy had just finished her jumping round, and there was Rum trotting, as happy as could be, tongue lolling, tail wagging, towards us. Only his 2nd time at that centre, but he remembered his way back to where the horse boxes were parked.

He has been a loyal companion and a good mate for all the years in between - the sort of dog you can cuddle when you need a friend. He loved his walks, loved chasing rabbits, although it never seemed to occur to him that the things with long ears and a cotton-bob tail that sat alongside the path were exactly the same as those that were down the bunny-holes. Rum would go hurtling past all the rabbits above ground, his long ears flapping behind him like the scarf-ends that the old-fashioned pilots wore (I would have called him Biggles had I known this!) his tail wagging, lips grinning: he was always laughing - and that tail never stopped waggng until he fell ill. He won the Waggiest Tail contest once.

Two years ago in early January he woke me up to ask to be let out into the garden. I let him out but he was such a long time I put my dressing gown on and went out to see why he was not coming back in (thinking perhaps the foxes had been at the pigeon loft again). There was something wrong. He couldn't walk straight, he was all lop-sided and wobbly; it looked like he'd had a stroke.
I called the vet as soon as the surgery opened, and Ron and I took him up as an emergency case.
We thought this was going to be his last ride in the car.

It turned out that this illness is common in dogs (and I'm sorry, I've forgotten what it is called) It affects their balance, can be treated but if it comes back the odds of a second recovery are slim.
Rum had at least three attacks. Each time he was left a little wobblier, his sight faded and his hearing went. His old legs had arthritis and he could only manage a slow amble, but he was still laughing, still enjoying life.

He developed a problem at night, when he would sleep so deeply he didn't realise that he was 'dribbling' a bit. The vet fixed that though, with a drop or two of medicine in Rum's dinner which tightened his bladder enough to sort things out.

We were worried about the move. It would be stressful for him, a new home, new surroundings, especially as he couldn't see too well or hear at all.
But he loved it here in Devon as much as we do.

He wobbled up the lane with us of a morning when we went to feed the horses, pottered about the garden, enjoyed all the sniffs in the hedgerow.
He laughed when we went for a walk in the snow - that wide doggy-grin of his - he so wanted to jump about in it! 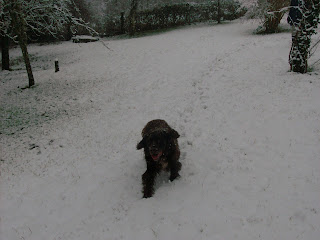 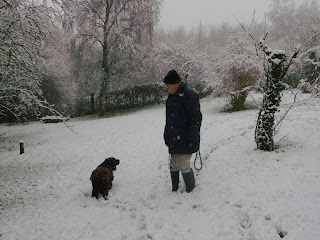 We took him to Instow beach a few days ago; his little face when he saw the dunes and the sand! He so wanted to go for a paddle, but we were careful not to let him go near the deeper channel of the River Torridge - just the shallows. He had a great time.

These last few days he has become even more wobbly, and was losing weight. He'd fallen over several times, a couple of nasty tumbles, and was not able to manage the slope in the garden or the step in the front garden. 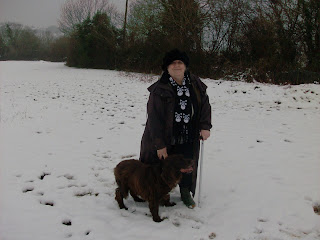 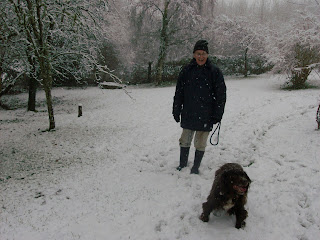 Old age, his illness and very probably the dreadful start that he had in life had finally caught up with him.
We took the decision to  let him quietly slip away before he deteriorated even further. I have always believed that the last service we can give our pets is to ensure they do not suffer any unnecessary pain or indignity, even if it means we have to go through that awful grief of losing them. It is more of a comfort to know they have not suffered just because we can't bear to part with them.

Rum's bouncing along in a cornfield, hurtling past the bunnies watching him, heading straight for a rabbit hole. I can see him, head stuffed down a rabbit hole,  paws scrabbling, bum and tail wagging fir to burst. He looks up, grinning.
'Ain't life grand mum?'
'Yes Rum, it is.'

I’ll lend you for a while

I’ll lend you for a little while, a dog of mine, God said,
For you to love while he’s alive, and mourn for when he’s dead.
It may be one or fifteen years, or maybe more than these,
But will you, ‘till I call him back, take care of him for me, please?

He’ll bring you love to gladden you, and should his stay be brief
You shall have his memories, and solace for your grief.

I cannot promise he will stay, since all on Earth return,
But there are lessons taught down here, I want my dog to learn.

I’ve looked this wide world over, in my search for teacher’s true,
And from the throngs that crowd life’s lanes, I have selected you.

Now will you give him all your love, and not think labour vain?
Nor hate me when I come to call, and take him back again?

Will you shelter him with tenderness and love him while you may?
And for the happiness you’ve known, forever grateful stay?

But when the angels call for him, much sooner than you planned,
Brave the bitter grief that comes, and please, try to understand.

He was made from love and trust, and most lovingly bred...
I’ll lend you, for a little while, a dog of mine, God said